Salinisation lurks everywhere, all the time 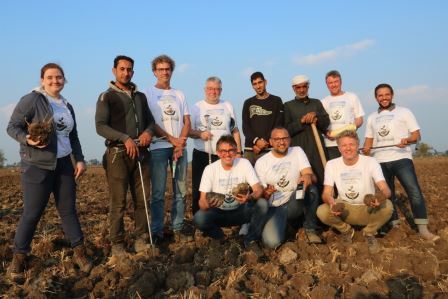 On the picture: Arjan Reijneveld in the lower right corner of the group photo (and in the test pit), wearing a T-shirt with the print "World Soil Day, Halt soil salinization, boost soil productivity" (October 2021).

December 5th is World Soil Day, an initiative from the Food and Agriculture Organization of the United Nations (FAO) to draw attention to the importance of fertile and healthy soil for world food production. This year, the FAO has made sodification (salinization by sodium) and salinization (salinization by, for example, potassium salts) the main focus points, as long-term global problems.

Recently I spent a week in Egypt, where I spoke with farmers, extension agents, researchers, policy makers, members of parliament, and retail owners. It was fantastic to observe how motivated and ambitious they were when it comes to optimising agricultural productivity and maintaining, or rather improving, soil fertility.

In Egypt, you could spot salt easily; some fields were as good as white. And that’s reflected in soil test results, with fields containing up to 25% sodium at the clay-humus complex (Na-CEC%). 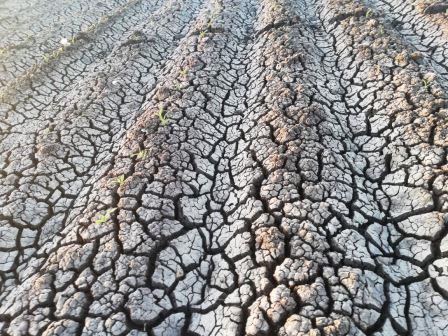 Salt is not only an issue in Mediterranean areas, where water is increasingly scarce; closer to home, in the Netherlands, we can also see salt posing a problem. For example, in the south-western province of Zeeland, we find areas where saline seepage is reducing calcium percentages (Ca-CEC%) and there is an abundance of sodium.  Furthermore, salt can effect the acidity (pH) of the soil and the fertilisation recommendations.

Salinisation has also become an issue Northern Europe, following the dry summers of 2018, 2019, and 2020. Eurofins Agro received questions and comments about the pH value on soil test reports, mostly from Germany and the Scandinavian countries. In fact, the pH was almost always lower than expected.

Too high a salt content in the soil is the reason behind this pH abnormality. This works as follows: most farmers start the season with the application of regular fertiliser, and this fertilisation introduces salts such as potassium (K), magnesium (Mg) (essential nutrients) and sodium (Na) to the field. In very dry seasons, these elements do not wash out, meaning the concentrations of K, Mg and Na remain high, which is exacerbated in cases of drought, due to low uptake by crops. The K, Mg and Na then compete with the hydrogen (H+) at the clay-humus complex and some of the H+ enters the soil solution.

When we then analyse the pH of the soil, it can be as much as 0.7 points lower than expected, specially when the typical pH of the soil was already low. The number of questions and comments we have received from Northern Europe about this show that farmers and their advisors are looking at soil test reports critically and are interested in protecting soil fertility.

So, the soil’s salt concentration built up in 2018 and had not disappeared by the start of the 2019 growing season, partly because crops had simply absorbed less during periods of drought. We found significantly higher potassium values in the soils at the beginning of the growing season, with the impact most noticeable in areas where K normally leaches out more easily, such as light sandy soils.  Eurofins Agro therefore advised farmers to give less potassium.  Farmers and their advisers had to get used to this. After all, the K-soil conditions were quite different from those from more typical years and so fertilisation had to be adjusted.

One of my earliest memories is of taking a shower under my grandfather's new sprinkler system in the famously hot and very dry year of 1976. How fantastic that was! I now realise that even back then, the concentration of salts in the soil will have increased and the pH must have dropped a bit. Salinisation is not a new topic!

Still, the effect of climate change on the results of soil tests takes some getting used to, considering all the reactions we received (about soil pH and K-fertilisation recommendations). In northern areas, intensive rain (and sometimes the use of sprinklers) can also desalinate the soil. Unfortunately, in Egypt, as in the other Mediterranean areas, this is considerably more difficult, although growers are resourceful and innovative: they told us that adding a season of rice cultivation to the rotation does help.

Fixing C in a changing climate: a new N challenge?